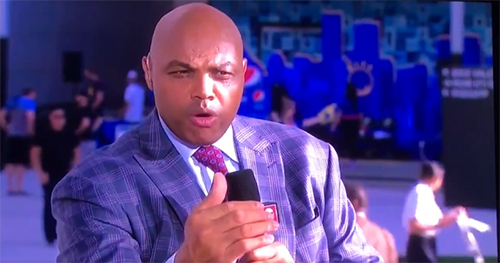 “First of all, Vice President Pence needs to shut the hell up,” Barkley said during an NBA pregame show on TNT. “All American companies are doing business in China.”

Barkley said it was unfair of Pence and others to call out Commissioner Adam Silver and star LeBron James for putting the league’s business interests over human rights concerns.

“I don’t understand why these holier than thou politicians—if they’re so worried about China, then why don’t they stop all transactions with China?” he added.

The Trump administration has taken major steps to impose economic tariffs and other penalties on China for its objectionable trade practices, though many private-owned businesses—including the NBA and its franchises—continue to turn a blind eye.

Pence accused the league on Thursday of acting like a “wholly owned subsidiary of the authoritarian regime” for refusing to allow NBA figures to speak out against the violent Chinese suppression of dissenters in Hong Kong and other issues.

“Some of the NBA’s biggest players and owners, who routinely exercise their freedom to criticize this country, lose their voices when it comes to the freedom and rights of the people of China,” Pence said.

He blamed the “progressive corporate culture” for creating a double-standard “that willful ignores the abuse of human rights” when it is inconvenient to acknowledge them while paying tremendous lip-service to what it claims are U.S. injustices.

China responded to Pence’s speech and said the vice president was “arrogant” and ignorant.

“The U.S. has already abandoned and cast aside its morality and credibility,” Chinese spokeswoman Hua Chunying said. “We hope these Americans can look at themselves in the mirror to fix their own problems and get their own house in order.”

China, a major basketball market, retaliated by ending sponsorships and canceling broadcasts of pre-season games held in the country.