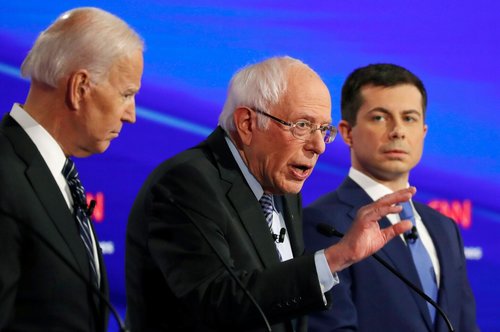 President Donald Trump warned Bernie Sanders just days ago that the Democratic National Committee will stop at nothing to deny him a victory, and it looks like he was totally right about it. Following former Indiana mayor Pete Buttigieg’s withdrawal from the race, the once-presidential hopeful is believed to be considering an endorsement for former Vice President Joe Biden.

Buttigieg’s withdrawal came as a shock to many, in the run-up to the Super Tuesday primaries where many voters have already cast early votes for him. The decision is believed to have been tactical, allowing other establishment Democratic candidates to get slightly ahead and potentially take on revolutionary socialist Bernie Sanders.

Thank you for inviting me into your homes, sharing your stories, and putting your trust in me. We launched our campaign because Americans are hungry for a new kind of politics that brings us together.

And together we’ll beat this president and build the era that must come next.

Supporters of Pete Buttigieg do not have a natural alternative to turn to in the Democratic race. The remaining large names include former New York City Mayor Michael Bloomberg, anti-war Tulsi Gabbard, former Vice President Joe Biden, socialist Bernie Sanders, and extreme progressive Elizabeth Warren. An endorsement from Buttigieg would go a long way in assisting one of the more “moderate” (ha!) candidates getting ahead of Sanders.

The New York Times reported that Buttigieg spokes to former President Barack Obama as well as Joe Biden on Sunday night to discuss what he should do next. Biden reportedly asked for his endorsement, but Buttigieg said he needed time to consider his options. A quick decision would assist Biden, but Buttigieg likely recognizes the fact that Biden’s recent gaffes could suggest his mental capacity could impact his ability to win in November.

Meanwhile, Barack Obama continues to stay silent and has not offered his friend Biden an official endorsement. Obama, according to the New York Times, was even noncommittal about encouraging Buttigieg to endorse Biden.

Does Obama see that Biden is unfit to lead the country, too?

Ultimately, Buttigieg may find himself forced to endorse Sanders. The only other candidate at this point I the race who could realistically take on Sanders is Michael Bloomberg, and he has proven to be an extremely divisive character in the party.

Isn’t it amazing how a candidate is immediately controversial in the Democratic Party if they unashamedly defend capitalism?