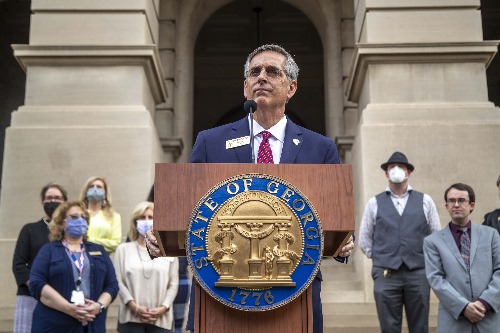 Georgia Secretary of State Brad Raffensperger announced Wednesday morning that there will be an audit and full hand recount of votes in the state for the 2020 presidential election.

“Georgia’s secretary of state has announced a full hand recount of the presidential race; Biden leads by about 14,000,” reported Zeke Miller, citing The Associated Press.

ATLANTA (AP) — Georgia's secretary of state has announced a full hand recount of the presidential race; Biden leads by about 14,000.

“This will help build confidence. It will be an audit, a recount and a recanvas all at once,” Raffensperger said at the press conference, according to CBS News. “It will be a heavy lift.”

Decision Desk HQ called Alaska for Trump earlier on Wednesday morning, awarding him the state’s three electoral votes. And on Tuesday, the outlet called North Carolina for the president, as well, earning POTUS another 15 electoral votes.

In Arizona, where there are 11 electoral votes to be collected, tens of thousands of votes are still being counted. Biden currently amassed a roughly 12,800 vote lead.

Trump has yet to concede the election, as lawsuits pend in multiple states over alleged voter irregularities and potential fraud, and ballots are still to be counted, or recounted.

Still, major media outlets, such as Fox News, ABC News, CNN, NBC News, and The Associated Press, declared Biden the winner of the 2020 election over the weekend.