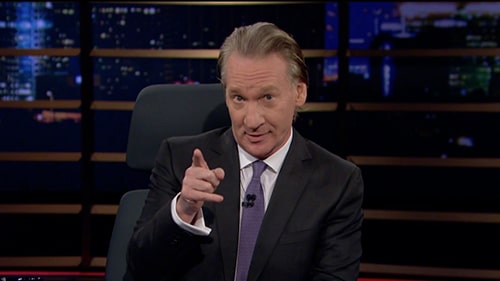 HBO’s Real Time host Bill Maher declared on Friday night, following the Senate’s rejection of extra impeachment witnesses, that America “lost democracy” this week and told his audience that he feels like he is “standing over a casket.”

“OK, I’m going to try not to cry during the show because we lost Democracy this week,” Maher said on Friday’s show. “I feel like I’m standing over a casket and thinking: ‘Hmm I should have been nicer when it was alive.’”

“It’s a done deal. This is going to happen,” Maher later added. “Trump will be acquitted on Wednesday. Republicans have nothing left to do but dot the i’s, cross the t’s, and fuck the u’s.”

Maher’s depressive admission followed the Senate GOP successfully blocking the Democrats’ demands for additional witnesses in the impeachment trial of President Trump. Sen. Lisa Murkowski (R-AK), one of the lawmakers Democrats hoped to win over, ultimately sided with her own party, citing the “partisan nature” of the impeachment process.

“Given the partisan nature of this impeachment from the very beginning and throughout, I have come to the conclusion that there will be no fair trial in the Senate. I don’t believe the continuation of this process will change anything. It is sad for me to admit that, as an institution, the Congress has failed,” she said in a statement.

“To not allow a witness, a document, no witnesses, no documents, in an impeachment trial is a perfidy. It’s a grand tragedy, one of the worst tragedies that the Senate has ever overcome,” he told reporters.

Bill Maher kicked off his return to Real Time this year by telling the audience, “This is it. This is the year. This is 2020. This is where it has to happen, where we have to desperately get rid of this man.”

“He needs to be removed,” he added, later fist-bumping House Speaker Nancy Pelosi (D-CA), who was his first guest.

“First of all thank you so much for waiting ’till we got back on the air before you started the impeachment,” he told the speaker, adding, “that deserves a fist bump.”