Biden’s Budget Shows Just How Unhinged This Man Is 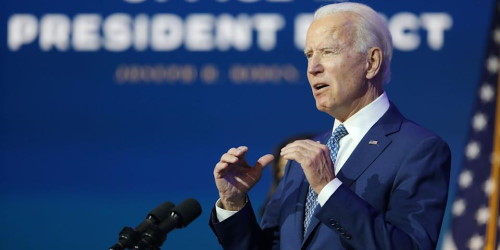 Back in World War II when America was fighting for its existence, the government spent more than $4 trillion in today’s dollars to defend itself from Germany and the Japanese Empire. Today, the New York Times is reporting that President Joe Biden will propose a budget of $6 trillion for 2022, rising to $8.2 trillion by 2030 with trillion-dollar budget deficits as far out as the green-eye-shade guys can see, including a $1.8 trillion deficit in 2022 falling slightly to $1.6 trillion by 2030.

And the only war being fought by the government is against the American taxpayer.

Perhaps it would be more accurate to say there’s a war against the grandchildren and great-grandchildren of American taxpayers. Because, by and large, today’s Americans would never pay that much to fund the government. Most Americans still see themselves as self-reliant, not needing the government to help.

But the evidence is overwhelming. Most voters give only lip service to that self-image. They crave the goodies from Washington and don’t care if the government spends itself to oblivion to give it to them.

In the past, voters have punished tax raisers and big spenders. But now, it’s party-on, Garth. With stimulus checks and the government paying people not to work, who’s complaining except a few fuddy-duddies who worry about the future of a nation?

Documents obtained by The New York Times show that Mr. Biden’s first budget request as president calls for the federal government to spend $6 trillion in the 2022 fiscal year, and for total spending to rise to $8.2 trillion by 2031. The growth is driven by Mr. Biden’s two-part agenda to upgrade the nation’s infrastructure and substantially expand the social safety net, contained in his American Jobs Plan and American Families Plan, along with other planned increases in discretionary spending.

The proposal shows the sweep of Mr. Biden’s ambitions to wield government power to help more Americans attain the comforts of a middle-class life and to lift U.S. industry to better compete globally in an economy the administration believes will be dominated by a race to reduce energy emissions and combat climate change.

The “ambition” of Biden and his party is to purchase the loyalty of important factions of the electorate. Identity politics is only part of the plan. Biden’s scheme is to cement the loyalty of upper-middle-class white people — college-educated professionals from the suburbs — and appeal to their growing sense of entitlement.

All of this money isn’t for the poor or the middle class. The programs being supported by this massive spending increase are to make life easier for working moms, acknowledge their concern over the environment, shield smaller investors while socking it to the rich, and generally enacting an agenda that reflects the new upper-middle-class consciousness of the suburbs: woke, green, and hip.

The levels of taxation and spending in Mr. Biden’s plans would expand the federal fiscal footprint to levels rarely seen in the postwar era, to fund investments that his administration says are crucial to keeping America competitive. That includes money for roads, water pipes, broadband internet, electric vehicle charging stations and advanced manufacturing research. It also envisions funding for affordable child care, universal prekindergarten, a national paid leave program and a host of other initiatives. Spending on national defense would also grow, though it would decline as a share of the economy.

Biden isn’t doing anything revolutionary. The government has been trending in this direction since the days of Bill Clinton. It’s the sheer size and audacity of the spending that should shock us.

Needless to say, this is exactly the kind of spending program Joe Biden’s most radical, most irresponsible supporters have been urging him to propose. They got what they wanted. Now let’s see if they can do anything with it.