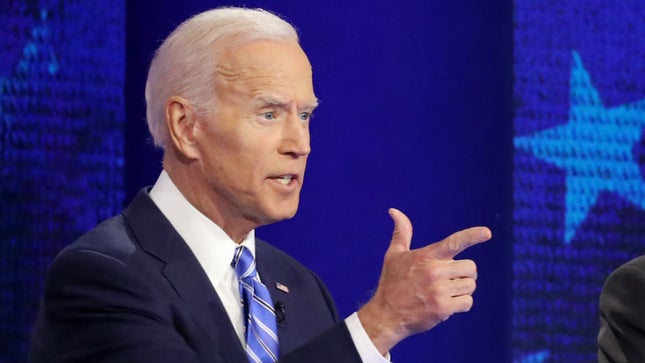 In an op-ed for The New York Times this week, former Vice President Joe Biden promised that if he were to be elected president next November, he would revive the 1990s-era federal ban on assault weapons as part of his efforts to stop gun violence. Biden’s platform on guns is similar to the Democratic Party’s longstanding approach to the issue, but his focus on semiautomatic rifles ignores the truth about our nation’s gun violence problem: Namely, that handguns account for a much larger slice of the death pie.

“We have a huge problem with guns,” Biden wrote. “Assault weapons — military-style firearms designed to fire rapidly — are a threat to our national security, and we should treat them as such. Anyone who pretends there’s nothing we can do is lying — and holding that view should be disqualifying for anyone seeking to lead our country.

“I know, because with Senator Dianne Feinstein I led the effort to enact the 1994 law that banned assault weapons and high-capacity magazines for 10 years. Those gun safety reforms made our nation demonstrably more secure,” he continued.

Biden went on to say that his initiative wouldn’t end at resurrecting that legislation:

"We’re going to stop gun manufacturers from circumventing the law by making minor modifications to their products — modifications that leave them just as deadly. And this time, we’re going to pair it with a buyback program to get as many assault weapons off our streets as quickly as possible.

I won’t stop there. I’ll get universal background checks passed, building on the Brady Bill, which establishing the background check system and which I helped push through Congress in 1993. I’ll accelerate the development and deployment of smart-gun technology — something gun manufacturers have opposed — so that guns are keyed to the individual biometrics of authorized owners."

The truth is, of course, that all of this nonsense is just political posturing at its worst. The AR-15 and its lookalikes represent the most popular sporting/home defense rifles in America. At the same time, mass shootings of the sort that we just saw in El Paso and Dayton account for a miniscule sliver of the gun violence seen every year in this country. Furthermore, of all the mass shootings that have occurred since 1982 in this country, only about 12% used rifles alone. If we drilled down to find out how many of those killers used the “weapons of war” that Biden is talking about banning, we’d be into the infinitesimal.

These shootings get a lot of attention, for obvious reasons. They are large, loud, ugly events that naturally attract our collective eye. But they are, in reality, a blip on the gun violence radar. And to focus all of this freedom-destroying attention on so-called assault weapons is to trade our rights for nothing more than the illusion of greater safety. We can argue whether or not it’s even worth trading our rights for actual safety, but to trade them for nothing more than mist and smoke?

Surely we can do better.