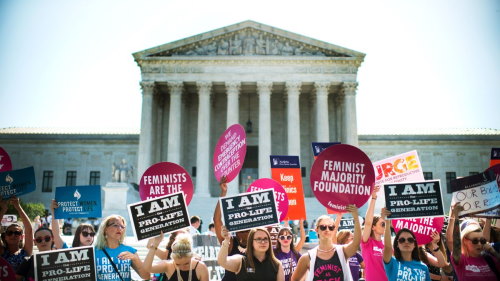 Garland spoke before a Senate subcommittee this week where Braun mentioned a declassified intelligence report about domestic violent extremism published by the Director of National Intelligence (DNI) back in March. That document, Braun said, classified abortion-related extremists as a prime threat.

“To me this feels like some sort of wild assault on the pro-life community,” the Senator said. “It did not mention groups like Antifa and BLM, who have obvious records of violent acts.”

“So can you tell me what this was about?” Braun asked. “Why is there a focus on this, and have there been incidents concerning it?”

Garland responded that the document describes threats that were racially motivated extremists, especially white supremacists, saying that he does not know where pro-life activists are on the “threat matrix.”

“It is not my understanding that they were shown at the high end,” Garland said.

“It looks like there is a disproportionate amount of focus or interest on this group and not others,” Braun said. “It will raise some concerns and then also beg the question of ‘is this effort being applied fairly or not across the board.’”

Garland stressed that there is a separate list of anti-authority or anti-government extremists.

“This is where some anarchists which you were just mentioning would fall into another category and that’s another area the FBI is focusing on,” Garland said.

The DNI document labels abortion-related violent extremists as having ideological agendas to support pro-life beliefs. The now declassified report does not however even mention BLM or Antifa, though it does mention them in the category that Garland referred to — anti-authority extremists, a category which contains militia extremists, anarchists, and sovereign citizens.