Biden Refuses to Wear a Mask After Signing a Mask Mandate 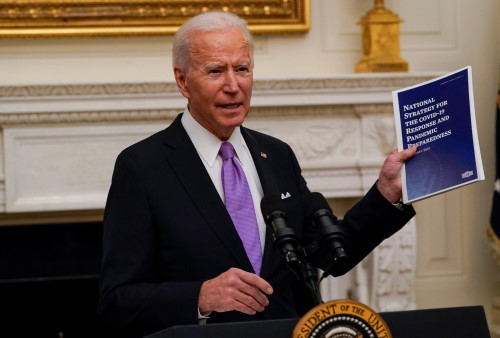 On Wednesday, President Joe Biden violated his own national mask mandate after he was spotted not wearing one in his visit at the Lincoln Memorial.

In a report, Biden signed an executive order to address the “pressing” issue of the coronavirus pandemic. This includes a call to require all Americans to wear masks or facial coverings.

Biden also announced the mandatory mask order in a social media post, “Wearing masks isn’t a partisan issue—it’s a patriotic act that can save countless lives.” He continued, “That’s why I signed an executive order today issuing a mask mandate on federal property. It’s time to mask up, America.”

Unfortunately, just hours after he signed the executive order, the new President was seen not wearing any facial covering. In a series of photos released by Getty Images, the President was seen without a mask while talking to the media members.

Here's Biden addressing the media, all of whom are wearing masks, while he continues to not wear a mask pic.twitter.com/J5XlCY4uzi

After talking to the press, his wife, First Lady Jill Biden, handed out his gloves and mask.

Jill Biden held out her husband’s mask and gloves to put on after he finished speaking at the Lincoln Memorial. pic.twitter.com/AjjFJUsOlv

Even his daughter, Ashley, as well as his grandchildren, were seen huddled together without any facial coverings.

Biden had previously criticized former President Donald Trump for his refusal to wear a mask. The President even called Trump an “absolute fool” for his decision not to wear one. In response, Trump mocked Biden stating that his mask only seems to get bigger every time he sees him.

Amid increasing tension between Trump and Biden, the former U.S. President decided to break years of White House traditions by skipping Biden’s Inauguration Ceremony. Trump was seen leaving the White House at around 8 a.m. on Wednesday while the Bidens arrived at the White House shortly around 4 p.m.