Biden Has the Worst Record of Confirmed Appointees 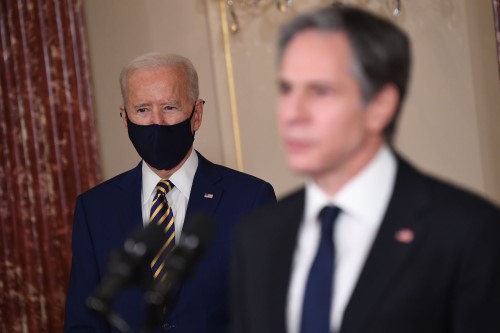 On Friday, reports mentioned that White House officials are worried about the scarcity of the Senate-confirmed nominees under the Biden administration, compared to the former Trump administration.

Biden leads the worst record of confirmed appointees in recent history, as the Democrat president has not installed a single ambassador eight months since he took office.  Due to this, White House officials are worried that Biden is trailing behind former President Trump when it comes to the confirmed number of appointees.

Throughout his term, Trump confirmed around 200 appointees behind George W. Bush and Barack Obama. Although the Biden administration was slow in seeing appointees passing into the upper chamber, the president also submitted more number of nominees for Senate consideration, compared to former president Trump.

Yet, only 124 out of 405 of Biden’s nominees were confirmed by the Senate and only eight out of the 88 State Department nominees were instated. To add more, none of the 60 ambassador nominees got Senate confirmation.

A spokesman for Senate Majority Leader Chuck Schumer mentioned that Senator Ted Cruz has a grasp on all of the State Department nominees, citing Cruz as the relevant factor in the lack of confirmed ambassadors.

Republican Senator Ted Cruz sits in on the Senate Foreign Relations Committee. He blocked dozens and dozens of nominees through the confirmation process as a form of protest against Biden’s sanction reversal on the penalty on Russia’s Nord Stream 2 pipeline.

It's like Biden is actively trying to signal weakness regarding Russia's aggression and coercion. https://t.co/tE0aDgPFsG

Cruz did not make any statement about how long he plans to bar State Department nominees by Biden. However, a spokesperson for Ted Cruz mentioned that he will use all prerogatives and leverage that he has as a senator. This will happen in order to have the Biden administration abide by the law and pass congressional mandates in sanctioning and stopping the completion of Russia’s pipeline.

On the other hand, the White House claimed that the protests made by Cruz jeopardized U.S. security by means of “undermining” the Department of the State. A White House spokesperson also mentioned that most of these nominees have nothing to do with the concerns Cruz mentioned.

On the other hand, many of appointees that Trump made during office resigned shortly after Biden became the president. This is due to series of concerns and antagonism towards the agenda that Biden is trying to push through.