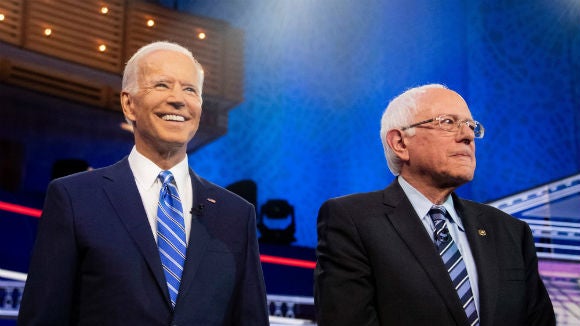 Bernie Sanders’ rise has led to a lot of interesting discussions within the Democratic party. It does not take a genius political analyst to see that the party does not exactly look to embrace Sanders. He ruffles a lot of feathers, whether he is looking to do so intentionally or not.

Now, the Democratic establishment is starting to speak out against him more openly. Joe Biden is leading the charge and that should be shocking to no one. He and Hillary Clinton have been letting him have it lately. Each of them has been forced to grapple with his appeal in recent years.

They both seem to be baffled by it and they are not willing to work alongside of him in any capacity. In their minds, he is leading the party in a very dangerous direction. The Iowa Democratic Party is also doing its best to shield “Uncle Joe” from a very harsh reality. The party’s voter base is not as fond of him as he assumed they would be.

Biden stepped into the race and there seemed to be an air of inevitability about it. He was definitely going to win the nomination with ease, right? There’s no way that Barack Obama’s vice president could lose. He was such a popular president among the left. However, Biden has wasted no time squandering all of the goodwill that he had earned over the course of those eight years.

He’s had one bizarre gaffe after another. These mistakes have finally caught up to him. The party decided to delay the results of the Iowa caucus as a means of letting him down easily. The loss is a crushing one and they did not want him to experience all of the headlines that called for him to drop out of the race.

Biden is the sort of candidate that inspires a lot of schadenfreude on both sides of the aisle. He snipes at fellow Democrats and Republican with equal zeal. The “coding error” that kept the results from being released has finally been resolved. As it turns out, Biden not only lost to Sanders but Mayor Pete as well!

Luckily for Biden, he is not receiving as much mockery as he should because the news of Trump’s acquittal sucked all of the air out of the room. This is his chance to slink away but we all know that he won’t be willing to do that. He thinks that the Democratic nomination is his birthright and he is willing to smear Bernie Sanders as much as needed.

He explained why the party’s establishment is not a fan of Sanders and it is telling. They view him as a socialist in the making. The party does not like how far left he seems to skew. In their minds, allowing someone with socialist tendencies to represent their party is a worst case scenario. Biden is now worried that the entire party will have to carry whatever label he is responsible for providing.

He is also concerned about Trump’s ability to paint the entire party with the socialist brush if Sanders is nominated. In his mind, the party as a while is going to suffer if Sanders is given the chance to lead them. The Democratic establishment is definitely going to be sweating this one out for months to come.

Their fear is evident. This is a far cry from how the Republican party handled the rise of Trump. While there was some initial bellyaching about his divisive approach, the party eventually got behind him without much incident. Sanders, on the other hand, is being treated like some sort of monster by the people he is ostensibly supposed to be working alongside of.

There are even rumblings that Obama might decide to speak out against him. Some even believe that Biden has yet to play his major card, tapping Michelle Obama to serve as his vice president. This race is sure to have many twists and turns over the course of 2020. No matter where you stand, it is interesting to see Biden so willing to throw Bernie Sanders under the bus before he’s even come close to winning a nomination.

Coming in behind him and Mayor Pete will have that effect on a campaign, we suppose. Biden surely thought that he would cakewalk to a Democratic nomination and now it is proving to be far more difficult than he ever could have imagined. The claws are out and the fight is on. The future of the Democratic party is now at stake.