AZ Audit Next Steps: Former Top Elections Official Says What Must Be Investigated 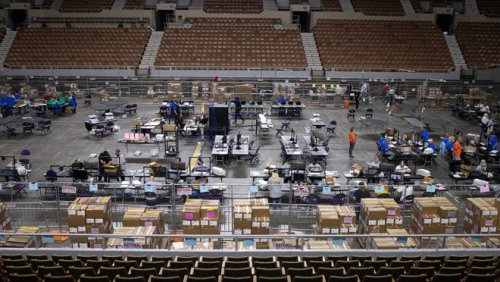 Hans von Spakovsky, a former member of the Federal Election Commission, says the discrepancies found in the audit of Maricopa County, Arizona’s 2020 general election must now be further investigated to determine if illegal and/or result-changing conduct occurred.

“This audit is just the start of what needs to be done in Maricopa County,” von Spakovsky, now an election law expert with The Heritage Foundation, told Newsmax the day the audit’s findings were released last month.

Newsmax host Heather Childers highlighted some of the potentially problematic issues reportedly uncovered by auditors, including 23,344 mail-in ballots sent from a prior address, 10,342 potential voters who voted in multiple counties, and 9,041 more ballots returned by voters than received. Then the host asked what stuck out to him.

“What this shows is frankly great sloppiness in Maricopa County in election officials not properly doing their job,” von Spakovsky responded.

He argued that Arizona officials need to investigate whether these findings are accurate and whether they involve mistakes or intentional wrongful conduct.

“If they find, for example, that there were individuals who were registered in more than one county and voted twice, those people need to be referred to law enforcement for investigation and possible prosecution,” von Spakovsky said.

“The county needs to go in and find out: ‘Are these two different people or are they the same person?’” he added. “Because that’s the only way to figure out whether there were enough votes there, enough fraudulent votes to actually make a difference if not in the presidential election, in other elections.”

Childers followed up asking how officials can distinguish between sloppiness and fraud.

Von Spakovsky replied it would depend on the circumstances, but pointed to the instance of individuals being found to have voted in two different counties.

“It’s hard to put that down as anything other than intentional, if they voted twice,” he said.

Ayyadurai, who holds a Ph.D. in systems engineering from the Massachusetts Institute of Technology, said that there were 34,448 ballot envelopes from just 17,126 unique voters.

The letter, signed by Assistant Attorney General Jennifer Wright, came just days after the release of draft reports of the Maricopa audit, which was commissioned by the Arizona state Senate.

“The Arizona Senate’s report that was released on Friday raises some serious questions regarding the 2020 election,” Brnovich said in a news release following the letter’s delivery. “Arizonans can be assured our office will conduct a thorough review of the information we receive.”

In a separate letter to Arizona Senate President Karen Fann, the attorney general requested unredacted copies of all reports created by the auditors, including supporting evidence of Ayyadurai’s findings.

In a statement last week, Maricopa County Board of Supervisors Chairman Jack Sellers promised to “provide factual responses” to the issues raised by the auditors.

“The opinions that came out of Friday’s hearing were conjecture without proof and were twisted to fit the narrative that something went wrong,” Sellers said.

ANNOUNCEMENT: We'll be issuing a technical response to the Senate's review of Maricopa County's elections in the coming weeks. Read more: https://t.co/cZVgyuVKJd pic.twitter.com/22kGoRgdDr

He added, “The fact is, the elections department ran accurate, secure and transparent elections in 2020.”

In January 2019, The Arizona Republic reported that the board, which is Republican-controlled, voted unanimously to look at taking greater responsibility for election oversight following what the paper described as a “chaotic” 2018 midterms.

That election cycle, as well as 2020, was overseen directly by then-County Recorder Adrian Fontes, a Democrat who narrowly lost his re-election bid in November.