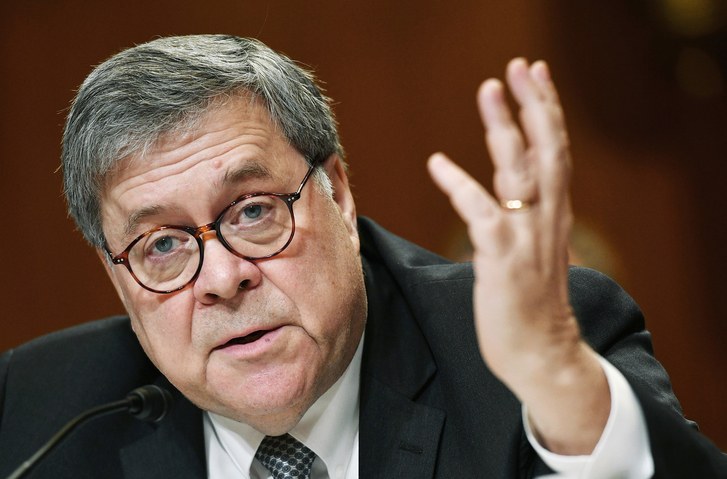 Attorney General William Barr has kept the faith with President Trump — but these days, he’s warning about how hard it is for Americans to keep their faith in the Land of the Free.

It’s an exact replica of a real religion. It includes unquestionable dogmas, its own morality, and enforcement of absolute purity… or you’ll be punished.

“Over the past 50 years, religion has been under increasing attack” from a “comprehensive effort to drive it from the public square.”

Christianity and Judaism face “organized destruction” by “secularists, and their allies among the ‘progressives,’” he said.

“Secularists have been continually seeking to eliminate laws that reflect traditional moral norms,” he said. “Irreligion and secular values are being forced on people of faith.”

It’s all about politics, he said.

And anyone who is not part of the revolution will be lined up for character assassination on MSNBC.

In the Sixties and Seventies, liberals said they wanted a free country where right-wing Christians wouldn’t “shove their religion down my throat.”

Now, they have a new counterfeit faith.

Left-wingers use their control of “mass communications, popular culture, the entertainment industry, and academia in an unremitting assault” on everyday Americans, Barr said.

Hollywood and its allies will “attack viciously” and “ridicule” anyone who doesn’t believe that a man who thinks he’s a woman is a woman, or that the middle class shouldn’t be forced to support those who are “unwilling to work,” as AOC’s Green New Deal puts it.

But something happened while the left was attacking religion: It became one.

Ironically, Barr said, “the secular project has itself become a religion, pursued with religious fervor.”

They really see government as a god, that will straighten out all our screwed-up lives.

Instead of taking responsibility, they demand the government “fix” everything, the way God answers prayers.

“The reaction to growing illegitimacy is not sexual responsibility, but abortion,” Barr said.

“The reaction to drug addiction is safe injection sites,” like in San Francisco and other needle-covered, liberal-run hellholes.

The welfare system sets up the government as a substitute father and husband to take care of single mothers and raise latch-key kids, Barr said.

Instead of fixing the mess we’ve created, we think we’re moral by virtue-signaling that we agree with the new, left-wing religion.

“We can signal our finely-tuned moral sensibilities by demonstrating for this cause or that,” Barr said.

Extreme left-wing political ideology has taken on “all the trappings of a religion, including inquisitions and excommunication.”

And guess what this religion does to heretics and unbelievers?

People with the guts to “defy the creed risk a figurative burning at the stake,” Barr said, through “social, educational, and professional … exclusion.” This includes “lawsuits and savage social media campaigns” to bankrupt small businesses.

Barr joins a growing list of people who believe the extreme liberals have started their own religion, with government at the center.

Tucker Carlson said, “The Democratic Party is now a religious cult” on his Fox News show back in July. “Dissent has been banned. Anyone who questions the party’s leftward fringe is denounced as a racist heretic.”

“The party has descended into a purity spiral, and nobody is safe, not even the party’s own leaders,” Carlson said.

But The Squad has been so effective cowing Nancy Pelosi and Chuck Schumer, D-N.Y. that they want to be missionaries, forcing all Americans to believe in their new socialist “god.”

“Law is being used as a weapon,” Barr said. He asked the law students at the Catholic university — based in Mayor Pete Buttigieg’s city — to be the real resistance.

Barr encouraged them, when they graduate, to “be particularly active in the struggle that is being waged against religion on the legal plane.”

“I can assure you that, as long as I am Attorney General, the Department of Justice will be at the forefront of this effort, ready to fight for the most cherished of our liberties: the freedom to live according to our faith.”

230 years after America’s founding, the Left is trying to create a new state church. Thank God for for public servants like Bill Barr, who are fighting for your right to attend the church or synagogue of your choice this weekend.

And don’t forget the consequences if they lose next November.