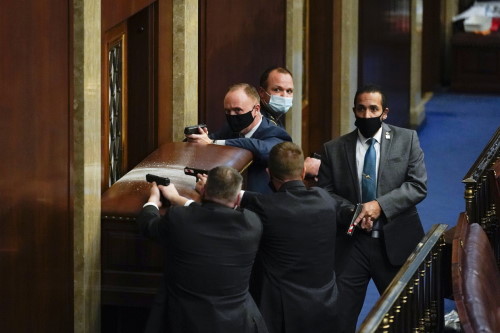 A Japanese investigator has conducted a video analysis of the shooting death of Air Force veteran Ashli Babbitt at the hands of Capitol Police last week and concluded it was Antifa, not Trump supporters, that provoked the violence.

Misako Ganaha explained while speaking with Epoch Times reporter Joshua Phillip on his program “Crossroads” that she analyzed two substantial videos taken from different angels of the shooting, which occurred when protesters stormed the Capitol Building last week.

One of the videos, posted by a user named “Jayden X” who was later identified as Antifa organizer John Sullivan of Utah.

Sullivan was arrested on the scene but later released without charges, while pro-Trump activists who had participated in the chaos were kept and subsequently charged.

According to D.C. police, the unidentified officer who shot Babbitt, herself a 14-year veteran of the Air Force, was in plainclothes, which certainly doesn’t ease already mounting suspicions about the incident.

Holy Shit! here is the video of cops shooting and what looks like killing a Trump-supporting woman inside of the capitol #WashingtonDC pic.twitter.com/wVjg7g1mav

by the Vice President.

Just after the glass was broken, Babbitt was shot as she attempted to go through the doors.

One of the men who broke the glass could be seen in the video descending a stairway and changing into clothing they had stored in a backpack.

Ganaha said it was clear to her that the two men were not legitimate Trump supporters.

The Okinawa, Japan resident professed to having seen these Marxist “agitate and divide” tactics used by leftists in her own nation, in fact.

She made clear that there were genuine Trump supporters who were in the Capitol that fateful day.

But that when it came to the violence, “the ones who were leading the crowd, or agitating the crowd, were not Trump supporters,” as she put it.

What’s more, she stated, “I think they had a plan.”

A key aspect of this tactic, she explained, is for someone who is collaborating with the agitators to take the role of “witness” for the sake of giving their account to the mainstream media, to tell the story “without analyzing.”

She explained that the media, in turn, adapt whatever their witness says “so the world does not know the truth.”

“The world is watching and we should know what the truth is,” she told Phillip. “And, then we can move on to what to think or what to decide, what to talk, what do next.”

“We just need the truth.”

Sullivan had told media that Antifa organized an event at the same time and place as the pro-Trump rally—wow, you don’t say?

In a video posted to Periscope on Friday, he claimed to have been inside the Capitol building solely for the sake of capturing the action on his phone.

“I was there to let people see that situation in the best possible way,” Sullivan, who has founded a group called Insurgence USA, said.

How convenient… don’t you think?

In an interview with Fox 13 in Salt Lake City he claimed his video had disproven the claim that Antifa-linked activists had donned Trump gear to invade the Capitol.

He explained that he’d been detained and questioned by the FBI, but not charged with any crimes.

He was, however, arrested for organizing a protest in Provo, Utah this summer, where one person was shot.