A Different Message: “Back The Blue” Mural Painted on Tampa Street 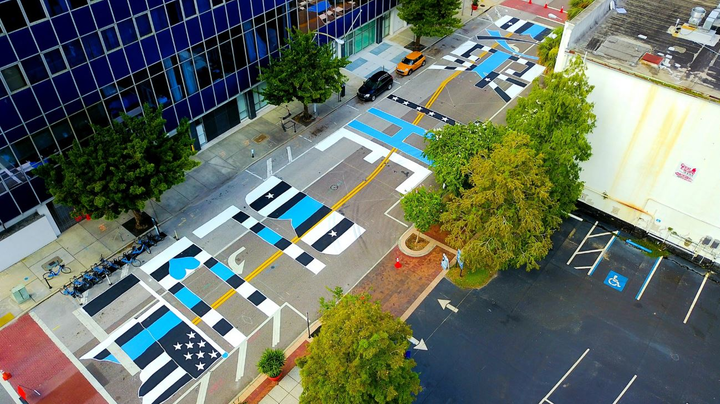 While “Black Lives Matter” murals have been painted in New York City, Los Angeles, and other major American cities, pro-police activists in Tampa have decided to show their support for law enforcement. At a time when many left-wing protesters are calling to “defund the police,” these supporters have gathered to show their love for cops in a big way by painting an enormous “Back The Blue” mural on the street in front of the Tampa Police Department.

The ‘Back the Blue’ street mural was painted by a group of 40 people Saturday night outside the Tampa Police Department’s downtown headquarters. The group said they wanted to improve police morale.

Kelli Campbell, who helped organize the mural painting, says it was all about showing support for law enforcement.

“We want to make sure that they know just because we aren’t the loudest, doesn’t mean we aren’t there and in numbers. There’s a huge force. Our Back the Blue Florida group has 5,000 members in it, and that’s just a piece of the puzzle, of course.”

There is, unfortunately, some controversy surrounding the painting. Namely, organizers apparently did not complete the permitting process before taking their paintbrushes to the street.

“Any tribute to honor their service is welcome,” said Mayor Jane Castor’s office. “It’s unfortunate they didn’t see the permitting process through so that our community could participate in showing their appreciation for the brave men and women that service our residents every day.”

It wasn’t clear from the report whether or not the mural will be allowed to stay.

Interestingly enough, this permit dispute comes in the same week that Mayor Bill de Blasio of New York admitted to reporters that the city didn’t bother with the permitting process when it came to painting “Black Lives Matter” on Fifth Avenue and other public streets. De Blasio was pressed on why the city was denying other groups the right to paint their own messages, which was why he acknowledged that the “BLM” message was so important that it “transcended” the need for a permitting process. Those other groups, however, would have to go through the traditional route.

It remains to be seen if de Blasio’s “this message is more important than other messages” logic will hold up in a court of law.